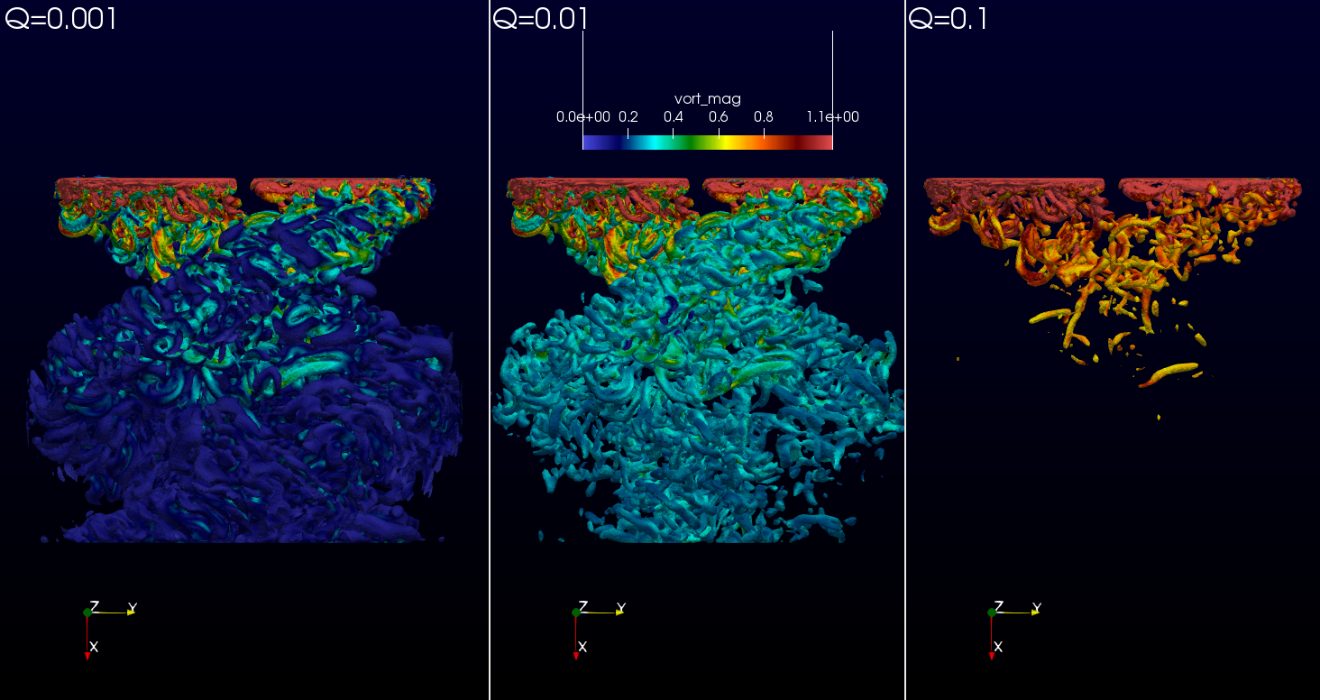 Learn how to gain key insights into flowfield dynamics through effective visualization of vortical structures in CFD.

While the concept of vortices and vorticity is generally understood among fluid dynamicists, detection and identification of a vortex in a flowfield is not as straightforward. Visualization of the coherent vortical structures in the flow can provide valuable understanding of the flowfield in a variety of cases such as a propeller wake, wing downwash, turbulent wake, etc. As a result, having a clear way to identify these structures becomes critical.

Often, the vorticity magnitude might be used to attempt to visualize these structures either through a maximum vorticity threshold or isosurfaces of vorticity. However, this does not always result in the desired coherent structures in addition to other drawbacks. While there are better metrics used to identify a vortical structure numerically, there is no single perfect method to do so. Nevertheless, we will focus on one of the commonly used methods for vortex visualization which is that of the Q-criterion.

To understand the q-criterion, we will take a look at its formulation. In tensor notation, the value Q comes from the definition of the velocity gradient tensor δui / δxj which can be broken out into two parts such that

Recalling the definition of the viscous stress tensor

we see that the viscous stresses are specifically functions of the strain rate only.

With that in mind, Q is then defined as the second invariant of the velocity gradient tensor

To demonstrate this technique for vortex visualization we will look at a simple two-bladed rotor spinning at 200 RPM in axial flow (cutaway of mesh shown below). 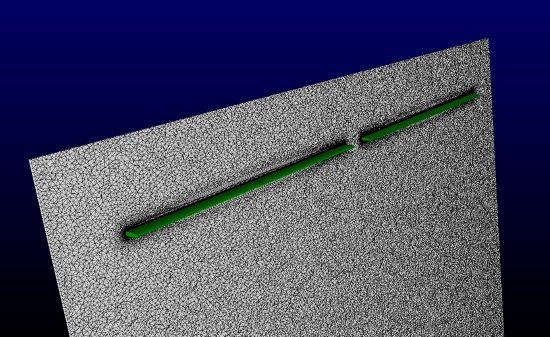 After allowing the flowfield to develop (~3 rotations) we first inspect contours of vorticity magnitude in two planes. 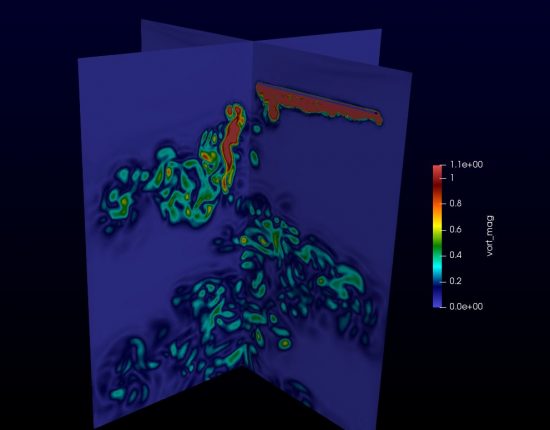 Even though some of the flow unsteadiness and hints of the vortical structures can be observed in each plane, planar cuts like those shown above are very limiting when attempting to portray the desired coherent structures which are inherently three-dimensional. Even looking at isosurfaces of vorticity magnitude won’t yield the desired structures which we will see evidence of shortly.

If instead we look at the same view but of contours of positive Q-criterion we notice a similar image. However, the boundaries of the structures are much more defined. 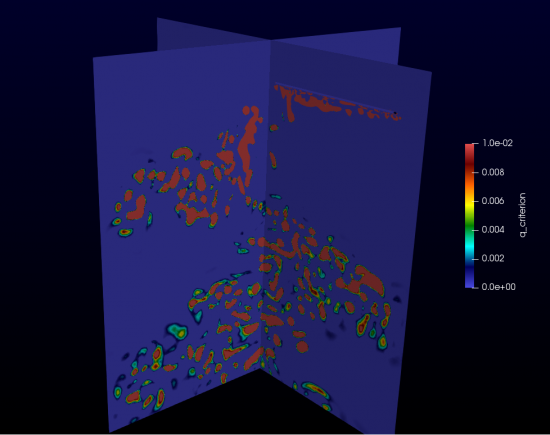 This can be leveraged to effectively define an isosurface of Q-criterion to extract the coherent vortical structures. Shown below is the resulting visualization colored by vorticity magnitude for Q = 0.01 . 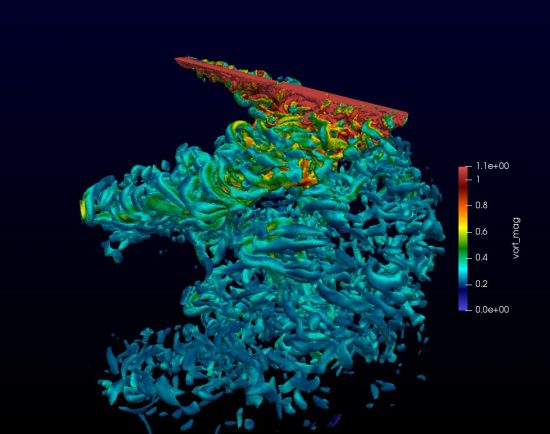 There are a few things to keep in mind when attempting to visualize vortical structures as seen above.

Selecting the appropriate value for Q

This is generally problem specific and can take some trial and error. A good idea is to check several values of Q with varying orders of magnitude keeping in mind that higher values of Q may result in a very limited portrayal of the vortical structures while lower values of Q can result in an excessive number of structures which is illustrated below. 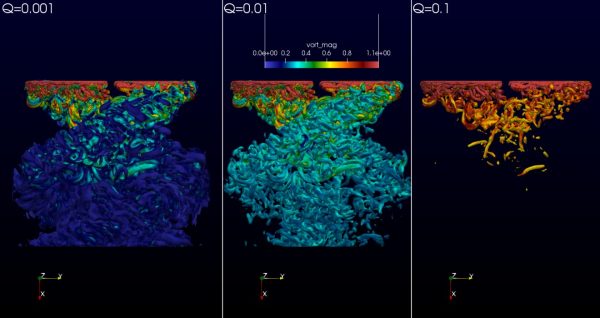 The definition and resolution of isosurfaces are entirely dependent on mesh resolution in the areas of interest. Capturing smaller structures like those shown above requires a significantly finer off-body mesh than might be typically used so far from the wall boundary surfaces. In this example, the entire farfield was set to an isotropic spacing of 10% tip chord which resulted in fairly defined structures at the cost of computational resources. A more sophisticated approach is to leverage adaptive mesh refinement (AMR) to increase the resolution in regions of high vorticity and to coarsen the mesh elsewhere. More details regarding AMR can be found here.

Recalling the definition of Q we can see that values of Q < 0 indicate areas of higher strain rate than vorticity in the flow. Knowing this, we can similarly plot isosurfaces of negative Q to visualize areas in the flow that are dominated by viscous stresses. 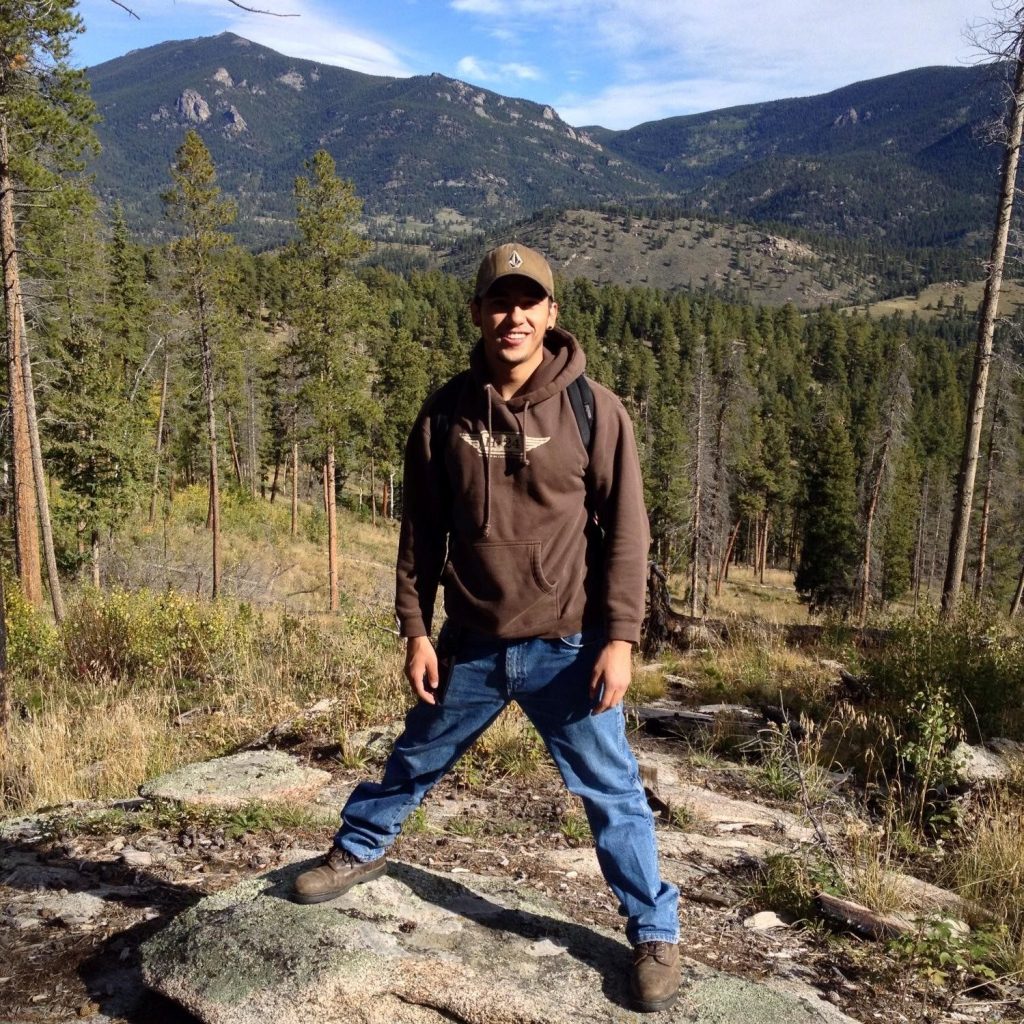 Eddie Szwabowski is an Aerospace Engineer with a background in Aerodynamics, CFD, and programming.  Outside of work he enjoys playing video games, shooting guns, and eating steak.