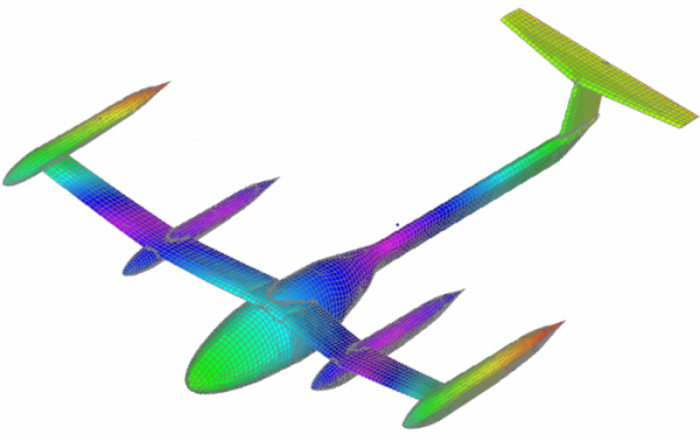 Chris Silva, a research engineer in the aeromechanics branch at Ames Research center, noted the difficulties he encountered with accurate weight approximations before his branch acquired M4SS, stating: “There have historically been pretty big error bars on how well we can lock down the numbers we come up with in conceptual design.”

Silva commented, “We wanted to come up with something that’s both credible and pretty fast, because we like to be able to look at several things in succession.”  In response, M4 Engineering revolutionized the procedures for estimating weight on conceptual aircraft designs with M4 Structures Studio.  M4SS streamlines this process by allowing users to:

The principal investigator for this effort was Tyler Winter, Manager of Research and Development at M4.

Dr. Myles L. Baker, President, M4 Engineering commented on the ability of the software: “Especially in the early phases of a program, when you’re updating this constantly—stretching the wing, stretching the fuselage—to figure out a combination that works, turning those iterations is enormously faster.”

In the past, manual computations of aircraft weight often took up to six months for a single model.  However, M4 Structures Studio has significantly refined the process for weight estimation of conceptual aircraft designs. With M4SS, engineers have the ability to receive weight-related feedback as soon as the initial models are completed, shrinking the procedure for weight calculation to weeks or even hours.

“The number of designs you can explore is much larger, and the chances of finding a design that really works is much higher,” Dr. Baker added.

Not only does M4 Engineering offer M4 Structures Studio as a stand-alone product, but the company also utilizes the software in-house for its consulting business. Additionally, M4 Engineering is looking to adapt an academic version of the product which could be used in universities and high schools.

About NASA Spinoff: Spinoff is a NASA funded publication which highlights NASA technologies that are benefiting life on Earth in the form of commercial products.  About 50 spinoff technologies are featured annually in the publication, demonstrating the wider benefits of America’s investment in its space program.

About M4 Engineering, Inc.: M4 Engineering focuses on solving the multitude of challenges that arise in the development of new types of manned and unmanned space and flight vehicles. M4 Engineering based in Long Beach, CA was founded in 2001 by Dr. Myles L. Baker to help commercial companies and government agencies predict and optimize vehicle performance, with emphasis on providing Multidisciplinary Design Analysis and Optimization (MDAO) software and services.